Look around - construction cranes dominate the skylines of most MAJOR CITIES, while new, well-funded chains occupy the high-rent store fronts. Towns once known for their UNIQUE FLAVOR are quickly being SANITIZED of their individuality.

HOLLYWOOD has been accused of following a SIMILAR SCRIPT.

The once flat and sprawling landscape gets more vertical each day. Traffic is such a hassle, many rarely leave their neighborhood. The cost of living has skyrocketed and the DIFFERENCES between the haves and have nots is becoming MORE PRONOUNCED.

Where you once had to break into the business, now YOU ARE THE BUSINESS. Social Media has become a direct path to SUCCESS & FAME.

, HOLLYWOOD is always THE STAR.

He believes La La Land success comes from big IDEAS, a POSITIVE attitude and CREATIVE problem solving. He uses WALKABOUTS to showcase the INSTAGRAM hustles of his interactions, serve up assists and manifest something for those left behind by the gentrification boom. 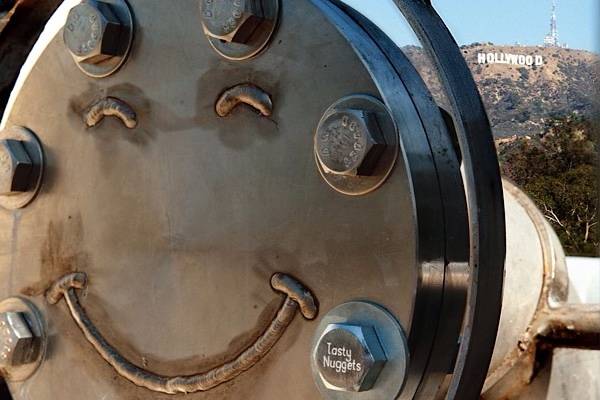 In Hollywood - establish your point of view

LA LA MAN stories showcase life In Hollywood through a series of Instagram-fueled ADVENTURES that strip the tinsel off the town. Each is a bouillabaisse of text, pics, posters and vids - a link-a-rama for the click-ably curious. Note: everything orange is live.

“Magic of the Moment”
A chase for the rainbow

“Never Break Stride”
A dance between the raindrops

“Head on a Swivel”
A look back at what's ahead