weaves his way through a series of colorful rose bushes and around a trickling fountain. He adjusts his face mask as he approaches the RED DOOR. Hummingbirds playfully chase each other and a bunny hops across his path. A NEON TITLE CARD reads HOLLYWOOD, CA.

Banjo's glove covered hand opens the door - the game is on.

SMACK Banjo's banged into by a guy on a Bird scooter distracted by his own FaceTime conversation.

Banjo spins off unharmed. The scooter guy THUD hits the pavement. He holds his bloody sleeve up to the screen.

They each take off in different directions.

A WASTED DUDE is splayed out on a small patch of grass. A dirty mask is all cockeyed on his face and an almost empty bottle of @Fireball sits on top of a single glove just beyond his reach.

Banjo pulls out his phone and quickly checks the local @HollywoodUnlocked and @NextDoor headlines. Crazy times - doesn't hurt to know if you're walking into anything unsavory. Good pal and musician SANJAY @SanjayParekh is unloading alkaline water from his sweet ‘65 Mustang. They faux high five from six plus feet away. Their namaste mornings are being seriously challenged by the homeless guy who starts calling them racists.

He dials up Country DJ @ElizabethCookForSheriff on SiriusXM, pairs up his headphones and takes off down the street. He passes a new multi-unit, multi-use property sandwiched between the few remaining old-school apartments screaming for an overhaul.

As “Crazed Country Rebel” starts playin’, Banjo's Earbuds beep with a call from one of the 2DANs @FartSavesWorld.

Groovin’ along, he answers. Dan is surprised to report that what Banjo told him to do to fix that thing actually worked.

Banjo dashes across the street in front of the unfortunately less busy post production studio @PictureHead. He spots two items oddly paired together. He steps past it, while simultaneously snapping a photo. Or two. 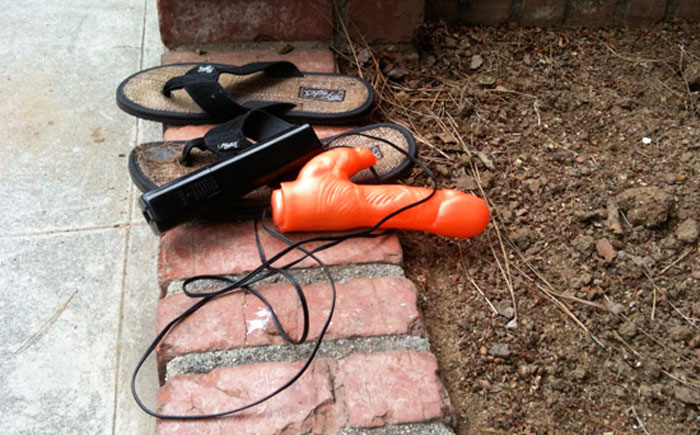 When he picks his head up, he spots an unmasked guy who looks just like Sanjay coming at him from the other direction. It’s music Producer YETI @YetiBeats - fresh off a long night in his Himalayan Studio.

From a safe distance, Yeti and Banjo mock a low five while still on the move - neither losing a step.

Banjo ziggies his way between a few of cars that have stacked up at the red light. Dan’s other line beeps.

Dan clicks off just as Banjo’s call waiting also beeps. He switches over while gliding past beauty boxers @Beautycon.

He listens to the opening salvo of a smart idea served up incorrectly. As ARTIE @ArtTender77 continues to get amped, Banjo rolls up on ALI @FakihFadi standing in full coveralls outside his cafe. They exchange exaggerated grins and puffed out, tough guy chests. As Banjo passes, Ali's latex gloved hand passes him a container of the yummiest looking ethnically authentic breakfast pastry.

Without breaking stride, Banjo does a 360 degree pirouette - raising the pastry package in salute to Ali’s mama - then turns his attention back to Artie who's finishing the reading of his letter.

Banjo jumps on the moment of silence. 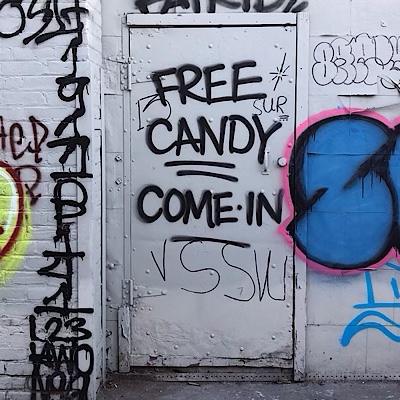 It’s Hollywood - don’t be a sucker

Banjo and Artie hear Dan beeping back on Banjo’s other line.

Banjo clicks back to Dan.

Banjo approaches the modest garage area that a city-wide fire bug set ablaze during an arson spree a few years back. He shakes his head thinking how scary that was and how lucky those people were.

Across the street, he checks out the empty drop off area of the new Charter @StratfordSchool. He certainly doesn't miss the mayhem of all those rude mommies at pickup time.

As he makes his way to the curb, Banjo thumbs open his Instagram. Actress DAWN @OhDawnAnderson is playing stress relieving eyebrow and smiling games, Chef MEGAN @ChefMeganMitch is servin’ up somethin’ yummy and the musician MOBY @Moby just posted another picture of himself with hair from back in the day.

Banjo nods a subtle approval as cars on both sides stop to let him cross. He hangs back for an extra spilt second and is glad he did - some asswipe texting while driving flies right in front of him.

Banjo puts the phone back in his pocket and makes his way into the street.

From the other sidewalk, the new public pool comes into view. No doubt it will remain empty for the foreseeable future, Across the way, the empty lot of the old Spiritualist Center looks on without judgement.

Up ahead, Banjo sees DJ. Hard to miss him with no protective gear and that huge Raiders tattoo on his head.

DJ - Danny James Moore - has lived on the streets of Hollywood for over 20 years. While most people come to LA to chase their dream, DJ came to escape his nightmare. On walkabouts, he and Banjo cross paths a lot and have shared more than a few stories about life on the streets.

In Hollywood - keeping clean can be a challenge

DJ smiles as he SCRATCHES himself. Banjo pretends not to notice.

Still moving, Banjo places the breakfast pastry container from Ali’s mama roughly six feet from DJ, who checks it out then looks up with a lustful grin. They point to each other as Banjo picks up speed -

As Banjo is contemplating how quickly things change on the street, he notices a hose hooked up at the far edge of a freshly cleared lot. He thinks maybe DJ could use it to spray himself down and clean up a little. He exhales a large breath - he should be able to come up with something better than that. If only...

Banjo comes across another tasty little nugget. This one is NSFW but he likes how it nicely showcases the many dualities of the ever-evolving Hollywood landscape. 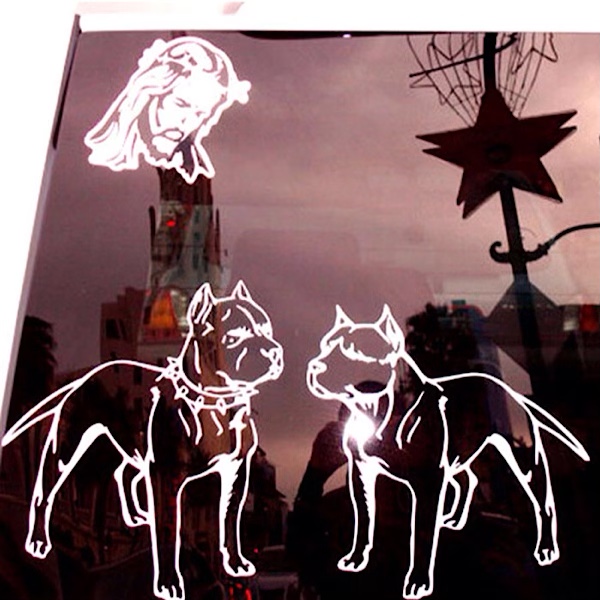 In Hollywood - the hunt is on

Banjo notices a text on his phone from his equipment entrepreneur pal JAKE @DowntownHockey.

They laugh as Banjo strides by the massive new construction next to the LGBTQ experimental theater @CelebrationThtr.

He passes the shy homeless pirate guy and notices he's added a face bandanna to his swashbuckled look.

A text comes back immediately from Jake. It reads: Frustrated. 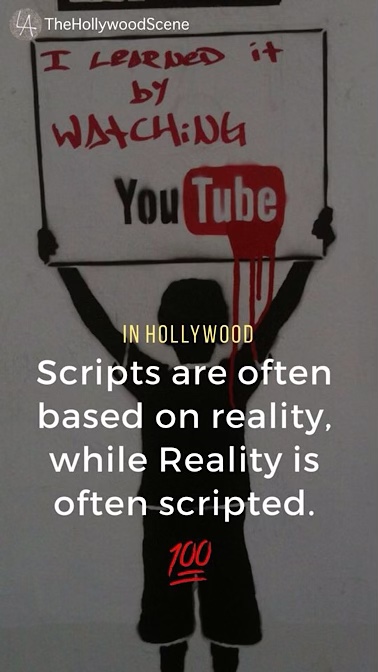 EXT. OTHER SIDE OF STREET - SOON AFTER

Banjo stands for a moment outside the country's first cannabis restaurant @LowellCafe. Until the virus, there was a line outside all day every day. Howard Stern @SternShow even broadcasted live from there when the show came to town. He laughs that it sits across the street from a synagogue. So Hollywood.

A car HONKS just as Jake’s WTF text comes through.

Even with full protection, Banjo ducks into himself as a street cleaner comes barreling by. When the haze clears, he notices a construction blockage up ahead. Seems the rickety front stairs of an old apartment building finally collapsed. A RESIDENT stares at the rubble.

Banjo immediately bounces in a different direction. He thinks again of DJ. How can he clean up his act if he can’t even clean up?

Banjo shakes his head as he passes the community garden @LAGardenCouncil that recently turned into upscale live-work lofts. An old GTO driven by RODNEY Bingenheimer chugs by.

Banjo comes up on an older dude - his mask detached from one ear. He looks like he just took a big hit of pot.

The outburst causes the dude to accidentally exhale - sending out a large plume of smoke. Rodney doesn't respond.

EXT. SIDE STREET - AFTER

Banjo turns the corner and comes upon two street hustlers getting ready for their morning shift.

In Hollywood - how you prepare is how you perform

There’s no traffic, so Banjo quickly darts across while continuing to respond to the Hustlers.

Banjo's phone lodges loose from his pocket but his quick hands keep it from hitting the ground. The journey continues unencumbered.

A confused Dan hangs up.

Unfazed, Banjo’s pace is fast as he strides past gated driveways, roots growing through sidewalks, a blinking traffic sign...

As if a jungle cat spotting prey, Banjo changes course and maneuvers effortlessly up a short driveway to a garage filled with junk. There’s a toilet piled high with cleansers and surrounded by construction items. Still in motion, he snaps a picture and is back on his merry way.

Guinness World Records thinks his huge collection of abandoned toilet pics, vids and musings is too weird, but the United Nations cherish his contributions to World Toilet Day - true story. 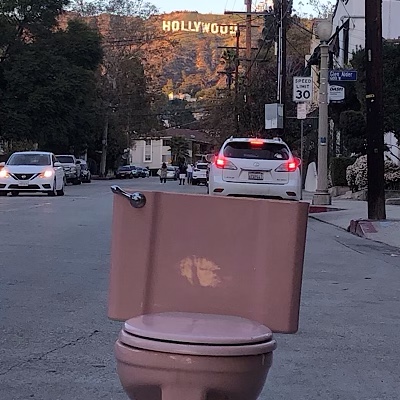 The pace is fast - the strides are long and the breathing is easy even under the mask. He approaches what would be a bustling West Hollywood Farmer’s Market and thinks to himself how good a falafel sounds.

Banjo crosses the opposite way from LA’s original scooterist HOLLAND @HollandMacFallister. They pass each other without interacting - then a masked Holland turns around and yells:

Banjo smiles and throws Holland a hey-how-do-you-do arm motion back.

The guy acknowledges the sentiment, then begins to reminisce to Banjo about the LA sport’s scene.

In Hollywood - people respond to a passionate pitch

Banjo wonders where this guy showers.

Up ahead, the freshly painted wall of the flagship @GuitarCenter comes into view. Banjo ducks into the first of three alleys.

He motors through the back of the Mexican restaurant @ElCompadreRestaurant taking in the smell of brown weed coming through one of the nearby apartment windows. He punches up Elizabeth Cook on Sirius/XM again - she chimes in almost immediately.

He comes out the other side into the driveway of @LosAngelesFireDepartment and nods an approval to the masked up gloved up firemen pulling sleds of weights.

One of the fireman holds up his hand to say thanks while bending at the waist to catch his breath.

The song begins to play.